Our first stop was along the north side of Yellowstone Canyon (near Canyon Visitor Center). We hiked down to the brink of Upper Falls then continued up part of the North Rim Trail stopping off at the various overlooks. We were able to spot an Osprey nest from one of the lookouts where a ranger had his spotting scope setup (it would have been nearly impossible to find and see otherwise). Eventually went back to the car and drove up to the final stop on the north rim at Inspiration Point before heading to the south rim of the canyon to the Lower Falls overlook and Ribbon Lake trailhead.

We planned to hike out to Ribbon Lake, which we had failed to accomplish on the last visit due to waist deep snow, but first we stopped off at the Lower Falls overlook and while there discovered that one of the two osprey nests had two osprey in it. I ran back to the car to get the telephoto lens to see if I could get some pictures. I did get some, though maybe needed faster shutter (or just have too high of expectations for the lens & camera combo).

After returning the big lens to the car, we did do the Ribbon Lakes hike. We saw four more osprey while on the trek out. Ribbon Lake was poorly marked, but we think we found it (found two marked campsites along the lake). This also served to settle any question of whether we should have been more persistent on the previous attempt. Given how long and remote the trail was, compared to how far we had made it last time, there was no way we were going to get to the lake in the snow that we had previously been facing where we were regularly punching through past our knees.  It wasn’t a generally challenging hike, but the distance would have prevented any chance of success in the snow.

We were already in the area, so we wandered the Canyons visitor center, gift shop and outdoor store for a bit before heading into Hayden Valley to make dinner and monitor for wildlife again. There was talk of wolves that might come through the trees and go along the ridge, so we hung around for a while, but they never turned up. We did talk to a guy who showed us how to find buffalo fur in the sage brush. Just after sunset, there were claims of bears off in the distance, but I could not make out anything bear-like through the camera and it had started to drizzle again so we went back to camp at Norris. 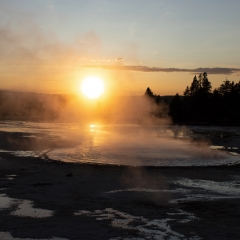 I'm a person. I live in Grand Rapids, MI and work as an Electrical Engineer. My hobbies at the time of this writing are kayaking, skiing, archery, photography and maybe biking. As this is my personal blog, my hobbies are likely the primary topics about which you will be reading.
View all posts by norconkm →